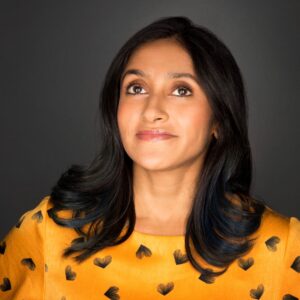 Aparna Nancherla is a comedian known for being dry, like wine. Aparna has had a fruitful adventure in the comedy world, as she studied at Washington Improv Theater, Kahn’s school of acting and a couple more institutes. Aparna has appeared in The Late Show with Stephen Colbert, The Late Show with James Corden, Conan, NBC’s Last Comic Standing and Inside Amy Schumer. She’s done radio, including NPR as well as festivals and video ads for MTV, AT&T and even a Bubly ad for the Super Bowl. Aparna has also opened for many great comics and has received much recognition such as 2018 Paste Magazine’s “20 Most Innovative Comedians Working Today.” Aparna is featured on Netflix with her own half-hour special on the second season of “The Standups.” This funny gal is one we’ve got our eye on and excited to see the new things she’s working on.

Check out a compilation of some funny moments from APARNA NANCHERLA’s stand-up here! Call 757.962.8777 for booking info.