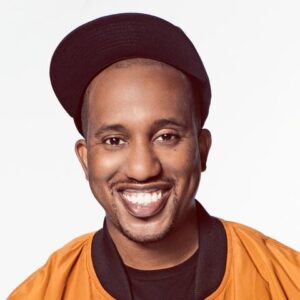 Chris Redd is an actor, writer, stand-up comic, and rapper from St. Louis, Missouri. Since 2017, Chris has been a regular on NBC’s Saturday Night Live and even received an Emmy for Outstanding Original Music and Lyrics for the SNL song “Come Back, Barack”. Before SNL he was a performer at Chicago’s Second City. Chris has appeared in the film “Popstar: Never Stop Never Stopping” and the Netflix comedy series “Disjointed”. You can also see him the series “Wet Hot American Summer” and “Comedy Central Stand –Up Presents”. His latest projects include the independent film “Scare Me” and the Broadway Video comedy “Vampires vs. the Bronx”.