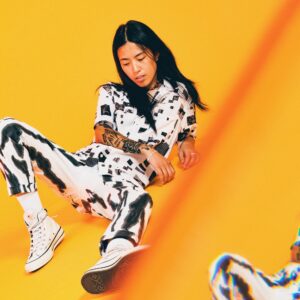 Deb Never is a bedroom, grungy, pop-style songwriter and vocalist out of L.A. In 2017, she started posting demos of her songs online under the name Deb Never. She explained how she originally created her name to be an Instagram handle when she first joined the social platform so when she liked a post, someone would get a notification, “Deb Never liked your photo” and it stuck because no one ever really knew her last name. Deb Never says making music was her way of escaping from everything that was boring, as she grew up in Spokane, Washington where she says it was too small and not enough going on. She was 11 years old when she learned to play guitar and even then would make her own tunes instead of doing cover songs.

In 2018, Deb Never collaborated with a producer from the WeDidIt Records collective on her first public work and was signed the next year. Also in 2019, Deb Never featured on a BROCKHAMPTON song and would occasionally perform live with the group. 2019 also brought her debut EP which later brought a collaboration with Tommy Genesis on a remix to a track from her EP. In 2020, Deb Never collaborated on a song with Kenny Beats and released a mixtape of songs she worked on during the COVID-19 pandemic. In 2021 Deb Never did a Calvin Klein campaign and released her next EP, “Where Have All the Flowers Gone.” Deb Never is all about experimenting, growing and a good vibe. We can expect more music from her and we will be looking out for just that!