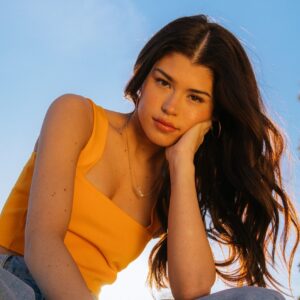 Dylan Conrique is a teenage pop artist from California.

Born in the early 2000’s, Conrique grew up with 2 siblings. She took dance lessons and eventually became interested in performing and landed an acting role at the age of three on a Japanese Television series, “The World’s Astonishing News,” about unusual or outrageous stories from around the world, most notably the United States. She did more screen work such as an appearance on TV show Henry Danger, and roles on movies Weird Wild Wonderful Days of School, and Chicken Girls. Conrique also had an interest in music as she started posting cover songs by artists such as Alessia Cara, Little Mix, and Shawn Mendes. Conrique began releasing her own music around this same time (2017.) She has continued to make and release music, recently bringing us “Birthday Cake,” a song written as a tribute for her best friend who lost her mother to cancer when they were only pre-teens. The lyrics are relatable to anyone who’s ever grieved a loved one. Conrique made efforts to raise donations for the American Cancer Society through posting the the music video as a fundraiser. Young minds and meaningful work is what the world needs, and we have our eye on Dylan Conrique!