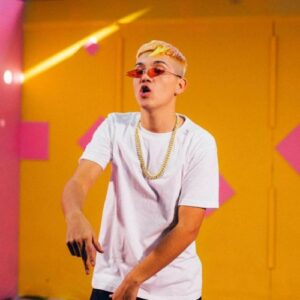 Harry Nach is a young (21) multi-talented artist from Chile. Nach is a vocalist/rapper, and producer who has risen as a leader in the “new Latin trap scene.” His music combines multiple genres ranging from Hip-Hop and Reggaeton to EDM. As a teenager, Nach broke into the music industry creating his own beats and releasing mixtapes that eventually helped establish his artistry in the genre. Nach performed at Chile’s first trap genre festival in 2019 and by 2020 had become Chile’s most listened to artist following the release of his global viral single “Tak Tiki Tak,” with 100 million Spotify streams and 45 million YouTube views in many countries including the US, Chile, Mexico, Spain, Argentina, and Switzerland. Clearly, Nach is above letting language barriers or geography stop his success and we support that!