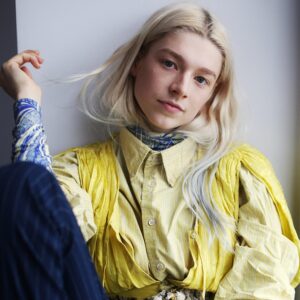 Hunter Schafer is a transgender model, actress and LGBTQ+ rights activist. Hunter Schafer was born in North Carolina where she attended University of North Carolina School of the Arts and became known for challenging the HB2 bill that would force individuals to use restrooms based on their gender assigned at birth which for her and others alike would not be ideal based on their personal identities. Schafer eventually moved to New York to pursue fashion modeling and went on to work for brands such as Dior, Versus Versace, Tommy Hilfiger and more plus numerous designers like Vera Wang, Marc Jacobs, Emilio Pucci and others. Schaffer has been featured in Teen Vogue, and in 2019 was cast in HBO’s drama series Euphoria alongside model and actress Zendaya,  which really boosted her popularity. Schafer acknowledges her role as an actoress, but also that she spent a lot of time acting like someone she wasn’t and regardless of her job title, doesn’t want to continue to do that — her goal is to be aware of how her character(s) can change or impact the way she lives as herself. She says she has faith in the evolution of how she makes art and that she’s “in this new phase where (she’s) kind of comfortable. Life isn’t happening to (her,) for the first time.)