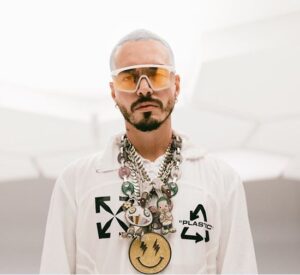 José Álvaro Osorio Balvin is a Colombian singer better known as J Balvin. Balvin is an award-winning artist and has been praised by Billboard as “the biggest breakout act Latin music has seen in many years”. He released his first single, “Ella Me Cautivo,” in 2009 and it landed at number 35 on the U.S. Tropical Chart. After releasing his debut album La Famila, his second album Energia and singles such as Mi Gente, and Machika, Balvin had eleven #1 Latin singles, over 50 million followers and over ten billion YouTube views. He has also collaborated with artist such as Beyoncé, Justin Bieber, Cardi B and many more. His latest album Colores is out now.