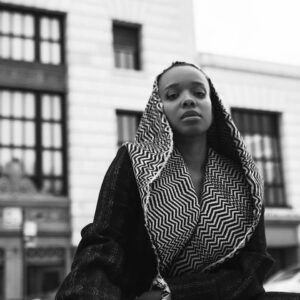 Born and raised in Chicago, Jamila woods is a singer, songwriter and award winning poet. She first started performing in church and after she graduated university she returned to her hometown and formed the duo Milo & Otis. Jamila also published her first chapbook, The Truth About Dolls, in 2012 and her poems are featured in anthologies such as The Breakbeat Poets: New American Poetry in the Age of Hip-Hop. In 2016, Jamila signed as a solo artist with Chicago’s Closed Sessions Label and released her first single “Blk Girl Soldier”. Her debut album “HEAVN” was released that same year and was followed by a second album “LEGACY! LEGACY!” in 2019. Jamila is currently the Associate Director of the non-profit youth Organization Young Chicago Authors.