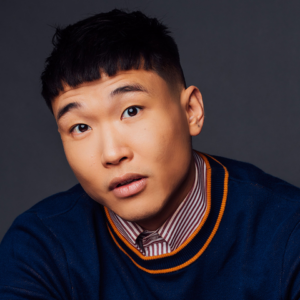 Joel Kim Booster is an actor turned comedian and writer out of L.A. who pursued this career after becoming tired of being typecast and deeming roles as the “silent, exoticized foreigner. Joel says, “It seems like a cliché now, but all you need is a religious background and you’re forced into comedy.” Joel’s goal through comedy was to re-claim his narrative he portrays in his work and be an openly gay, Asian-American man. Joel’s approach to comedy is to be relatable, not questioning if his work will  alienate Middle America, but making sure there is something universal in all of the truths that he speaks about. He’s starred in movies on Netflix, Hulu, and HBO, as well as TV shows such as Big Mouth and American Dad. Let’s not forget he also co-hosted alongside KeKe Palmer for a reboot of the 90’s MTV dating show, “Singled Out,” now aired on Quibi. Joel has done stand-up, sitcoms, hosted radio shows and podcasts. We heard we should be keeping our eye on this funny guy for more!