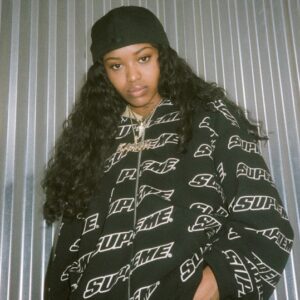 Kaash Paige is a young artist out of Dallas, Texas who says she’s always been “different,” and likes that style to carry through her music.Kaash’s stage name comes with meaning and is actually a backronym for “Kill All Arrogance Stop Hatred.” Kaash started writing and recording music in high school after shifting gears from her sports interest. The music she created and shared to Sound Cloud got the attention of several labels and eventually she landed a contract with a label. Her first major song, “Love Songs,” took in the Tik Tok storm, and also touched Billboard’s Hot R&B Songs chart around the same time. Shortly after these instances, she released a seven-track EP including the viral song, as a bonus and by the end of (2020) there was a remix featuring 6lack. Kaash continued to release loose tracks and also gained a management deal and released a debut album. This young artist is an Icy Park (IVY PARK x Adidas) campaign ambassador, and later in 2021 we can expect the release of an LP and major tours including Rolling Loud.