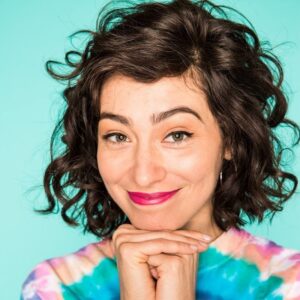 Melissa Villaseñor is a stand-up comedian, actress, artist, and musician who has headlined in clubs and college shows around the country. Known for her comedic impressions, she got her start as a semifinalist on “America’s Got Talent” and went on to become the first Latina cast member on Saturday Night Live. She is currently on her fourth season of SNL where she wows the viewers with her impressions of Lady gaga, Gwen Stefani, and Alexandria Ocasio-Cortez. Melissa has appeared in episodes of the HBO series “Barry” and “Crashing”, and has voiced characters for “Wreck It Ralph 2” and “Toy Story 4”. She has also been named one of Forbes 30 Under 30 and Rolling Stone’s 50 Funniest People Right Now.