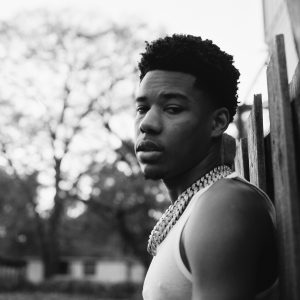 Nardo Wick is a young rapper on the rise who’s seen major success since the release of his single, “Who Want Smoke,” in early 2021.Nardo Wick is from Jacksonville, Florida with a rare “out of the mix,” reputation. He stays relatively private, which is reflected in his 18-track album, “Who Is Nardo Wick?” The album includes major hit “Who Want Smoke,” which followed with a remix that features rappers Lil Durk, 21 Savage, and G-Herbo, making the song one of the biggest of the year with 54 million views in just over a month as well as a dance trend on Tik-Tok, and popularity amongst other platforms. In the midst of that buzz, Nardo Wick released another hit single, “Me Or Sum,” featuring artists Future and Lil Baby.

Nardo Wick’s music career began with a $40 microphone in 2019, where he recorded at home with his dad’s help as his music engineer, and developed his craft by watching YouTube videos and studying his favorite artists speaking on the industry. He “soaked up game,” and now he’s playing it. Nardo Wick was the youngest member of the 2022 XXL Freshman Class, something he used to dream of.

Check out NARDO WICK’s music video for “Burning Up,” featuring artist The Kid LAROI below. Call 757.962.8777 for booking info.