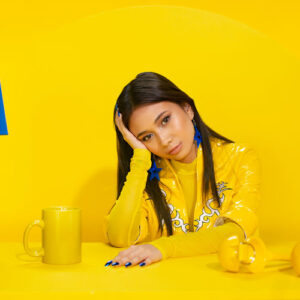 NIKI is a pop singer, songwriter and producer with 90’s R&B influence. NIKI grew up as Nicole Zefanya in Jakarta, Indonesia. Growing up listening to late 90’s R&B music, NIKI acknowledges that she did not have anyone that looked like her to musically look up to. Moving to the United States was an ironic confidence boost for  her as she had to adapt and culturally compromise while gaining an appreciation for her original home in Indonesia. After building a fan base through posting acoustic songs and covers on YouTube in her mid-teens, she released her first single (2016.) A year later, she joined 88rising, an American mass media company known for it’s hybrid offering of management, record label, video production and marketing; a platform for Asian artists. Under this roster, she released her first song as NIKI in 2017, a fully produced debut EP in 2018, and a full length in 2020.

2021 was huge as she had the opportunity to contribute to the Marvel movie soundtrack for Shang-Chi and the Legend of the Ten Rings with song “Every Summertime.” NIKI has expressed that a lot of her friends “back home” have tried very hard to make it (musically) internationally and she feels a social responsibility being in the U.S. and a part of the first collective of its kind, bridging the East and West successfully. In 2019 during her Head In The Clouds Festival performance, NIKI took the time to address Asian heritage. “I  just want to say, as an Asian female, I do not take this day and this stage for granted. My hope is that above everything else today, that you feel heard, you feel understood, but most of all that you feel represented.” The festival showcases Asian artists from the 88rising collective, and had a huge, diverse turnout indicating the growth and influence.

The only female headliner, NIKI with pride, opened her set with the Indonesian national anthem with a backdrop of tropical flowers and confident women, and beautiful visuals from the crowd waving flags and singing throughout the entire set. The festival fell on Indonesian Independence Day, and NIKI deemed it important to show kids they should and could own where they are from, because she knows what it is like to grow up in the States as an Asian and go through identity crisis. “I just want Asians to be proud that they’re Asian because Asians have just been so underrepresented and it’s been a very unspoken, untouched territory. I just want kids to be proud. Honestly, that’s it.”