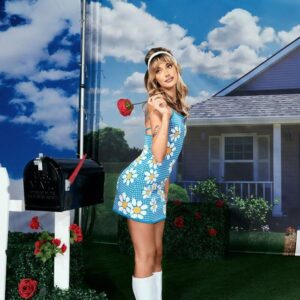 Olivia O’Brien is a chart-topping pop artist from California. Making her breakthrough in the late 2010s, O’Brien has brought us some of our favorite dance/electro-pop songs. Collaborating with L.A. singer, rapper and producer gnash, O’Brien gave us “i hate u, i love u,” which touched Top Ten of the Hot 100. At a young age, O’Brien sung and taught herself to play guitar and piano which eventually turned into her writing her own music as well as doing cover songs and posting videos online. One of the cover songs she did was “Disposable” by gnash, which caught his attention and he wanted to hear her original material. “i hate u, i love u,” was actually one of O’Brien’s original pieces gnash chose to collaborate with her on and posted it in 2015 and again in gnash’s 2016 EP and finally as a commercial single. 2016 also brought O’Brien’s debut solo single “Trust Issues,” which followed by more singles. She has worked with artists such as Blackbear, G-Eazy and Jack & Jack. O’Brien has continued to work to give us new, memorable music – 2021 gave us “Sociopath.” O’Brien is one to look for in music, and we are doing just that.