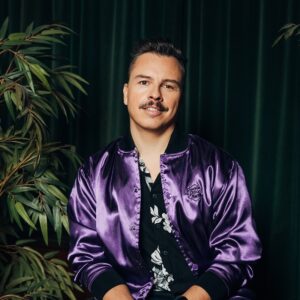 Purple Disco Machine is the project of Tino Pinotek, a German disco and house music producer, DJ, and remixer with high club and radio success. Pinotek began making music as a teenager and often visited clubs, which he later impacted the underground scene with club hits like 2013’s “My House.” In his earlier days of making music, he’s gone under multiple different aliases, and established Purple Disco Machine in 2009. Purple Disco Machine’s debut album came in 2017 and by 2020, his music rolled over into mainstream with this first major hit song “Hypnotized,” with Sophie and the Giants. Pinotek (Purple Disco Machine,) has done remixes for many stars such as Ariana Grande, Lady Gaga, Elton John and more.

Check out PURPLE DISCO MACHINE’s “Hypnotized” with Sophie and the Giants  music video below. Call 757.962.8777 for booking info.