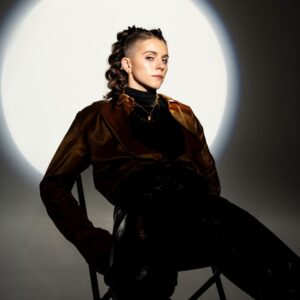 Rock band PVRIS (pronounced “Paris”) consist of front women and vocalist Lynn Gunn along with band members Brian MacDonald and Alex Babinski. Growing up in Lowell, MA, Lynn always had a love for music. At a young age, she taught herself to play the drums, guitar, and bass by sneaking into her brother’s room and playing for hours. Lynn officially formed PVRIS in 2013 and released their first LP “White Noise” a year later. In 2017, their second album “All We Know of Heaven, All We Need of Hell” landed in the top 5 of Billboard’s Top Alternative Album charts. Over the years they performed at festivals such as Coachella, Lollapalooza, and Reading & Leads as well as “Jimmy Kimmel LIVE!” in addition to selling out headline dates worldwide. Their newest album “Use Me” is out now.