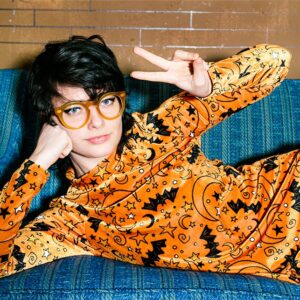 Sarah Sherman is a comedian from Long Island with an alter ego she likes to call “Sarah Squirm.” After graduating college in 2015, Sarah moved to Chicago which is known for breeding comedic talent, and began experimenting with comedy performing at various venues and testing out the scene. Sarah, now a cast member of Saturday Night Live (SNL,) shares this comedic upbringing with many of her castmates. Sherman found that most comedy shows are about the same, and wanted to provide comedy that would challenge what the viewers like and also bring something different. Sarah’s comedy can be grotesque and explicit, so it’s not always everyone’s cup of comedy, but there is a market for it and that’s where she found her niche. Helltrap Nightmare, a “traveling freak show,” that provides comedy, music, art and freaky behavior is a project she is also a part of. Sarah still does live shows and stand-up, and also puts out unique digital content. She’s a unique individual and we are interested to see what she will bring and shake up within the comedy industry.