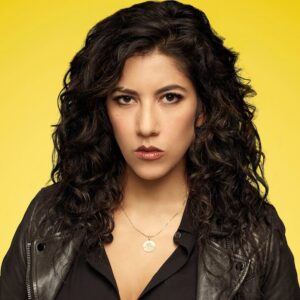 Stephanie Beatriz is an American actress, comedian, producer and LGBTQ+ activist from Argentina.

Stephanie Beatriz is known for her role on NBC’s TV show, Brooklyn Nine-Nine and ABC’s Modern Family. The Lego Movie 2: The Second Part, is another film the actress can be found vocally in, and we note as an interesting choice because her signature eyebrow scar came from tripping over a leggo when she was younger. Stephanie has starred in multiple indie films, and most recently major screenplay “In The Heights.” Stephanie now has her own podcast called, Reality Bites. Stephanie Beatriz is talented and has many notable roles and film credits. We must also note that although she is married, she still identifies as a bisexual Latina and stands firm in speaking up for LGBTQ+ rights and queer representation, as you can see in her various roles on the big screen. We are looking out for upcoming work from Stephanie Beatriz!

Check out STEPHANIE BEATRIZ’s speak on representing as an LGBTQ+ member in her TV role below. Call 757.962.8777 for booking info.