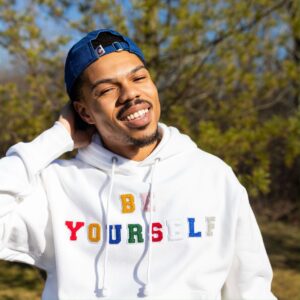 Taylor Bennett is a rapper from Chicago.Taylor Bennett is the brother of Grammy winning rapper Chance the Rapper who made a name for himself by releasing mixtapes when he was in high school. Taylor began doing live shows and went on to open for various major artists such as Nas, Vic Mensa, and YG. Taylor has done collaborations with his brother as they have similar styles (but different flows.)  Taylor Bennett notably came out as bisexual to his fans in 2017 as he strived to reflect his beliefs of accepting and respecting people for who they are, as his family always did for him. He believes the (hip-hop/rap) industry to house people that don’t feel okay with being themselves, and feel like being different is to be wrong. Taylor Bennett is an advocate for individuality and LGBTQ+. His 2018 album “Be Yourself,” was a concept derived from his belief and desire to celebrate differences. “Be Yourself” has been a  successful work for Taylor, including an apparel collection. Taylor emphasized that no matter if one is gay, straight, white, black, rich or poor, how important it is in understanding the power of being yourself. — Taylor and Champion Athleticwear partnered (2022) for a tour “Be Yourself, Be A Champion,” intended to encourage unique style and confidence for fans who play by their own rules.

Taylor recently released a new album after almost 4 years since his last release of a body of music. This album, “Coming of Age,” follows his quest to explore his creativity and not be defined by labels.

Check out TAYLOR BENNETT’s music video for “Fall Short,” from his latest album below. Call 757.962.8777 for booking info.