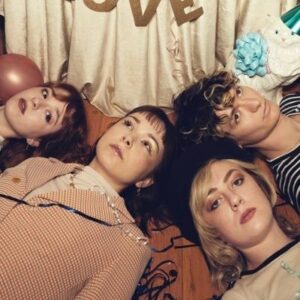 The Regrettes is a rock band led by singer/songwriter Lydia Night. Along with Lydia the other members of the band are guitarist Genessa Gariano, bassist Brooke Dickson, and drummer Drew Thomsen. Lydia formed the band in 2015 with Genessa but their first singles, “A Living Girl, “Hey Now”, and “Hot” were not released until 2016. Following their 2018 release of their EP “Attention Seeker”, they have been featured on covers of the LA Times and LA Weekly plus received praise from the Rolling Stone, Billboard, USA Today, and Variety. They have also appeared in festivals such as Bonnaroo, Coachella, Firefly, Governors Ball, and Lollapalooza. Their latest album “How Do You Love?” is out now.