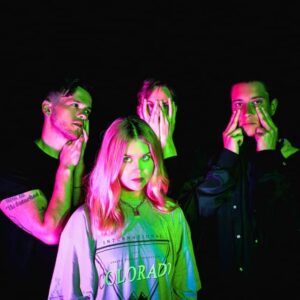 Transviolet is a Los-Angeles based pop quartet whose debut single, “Girls Your Age”, caught the attention of Katy Perry and Harry Styles. The band meet on a music networking site and is made up of vocalist Sarah McTaggart, multi-instrumentalist Michael Panek, drummer/producer Jonathan Garcia, and guitarist Judah McCarthy. Their self-titled debut EP featured their hits songs “Girls Your Age”, “New Bohemia”, and “Bloodstream” and gained instant online traction. Transviolet has toured with LANY, Twenty One Pilots, played at Firefly and has also appeared on the Today Show and The Late Late Show. After putting out more Eps, Transviolet release their first full length album “Born To Rule” earlier this year.