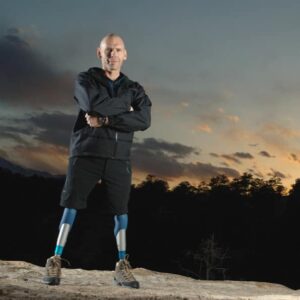 Warren Macdonald is an inspirational speaker who’s story began when he became trapped under a one-ton boulder during a mountain climb. In 1997, Macdonald was in Austrailia on Hinchinbrook Island, climbing to the island’s tallest peak when the rock fell on him. He was rescued two days later and had to receive amputation on both legs at mid-thigh. Macdonald did not let this stop him from doing what he loved to do, and continued to go on climbs using a modified wheelchair just 10 months after the accident. In 2003 became the first double above-knee amputee to reach the (summit of Africa’s) tallest peak, Mt. Kilimanjaro.

Warren has a bestselling book, documentary, and has appeared in many news and TV programs including The Oprah Winfrey Show, and Larry King Live. He now does work as a keynote speaker, with the goal of developing resilience and fostering “out of the box,” mindsets.