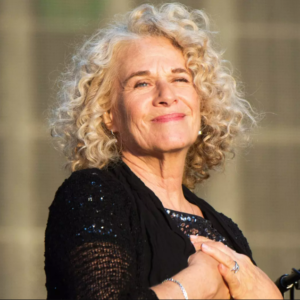 For Women’s History Month, we are spotlighting iconic women who’s talent impacted the history of music. Today we present: Carole King, Pop legend. Carole King is a singer songwriter. Her mother was the source of her early music education. As a child she played piano, and in her teens began writing music. King was a part of a quartet called the Co-Sines in which she arranged and composed music for. Later, King attended Queens College where she met her future (now divorced) husband, and dropped out of school to write music together — little did they know they would become such a successful duo. Together, they wrote their first hit “Will You Love Me Tomorrow,” recorded by the Shirelles in 1961 and it  became a number one single on the U.S. Hot 100 list before King was even 19 years old. King (and her then-husband) went on to compose many songs for multiple artists including the hit “(You Make Me Feel like) A Natural Woman for Aretha Franklin in 1967.

King was not only a writer. She developed her own love of performing too. As she worked with James Taylor on tour, playing piano and singing on his album, he encouraged her to do her own thing too. Her debut album came in 1970, capturing national attention as a solo artist only a year later. Her album Tapestry held the number one spot on the Billboard chart for 15 weeks and was best-selling for more than 300 weeks. This album brought her 4 Grammys – Album of the Year, Best Song, Best Single and Best female performance. In 1987 she was inducted into the Songwriters Hall of Fame.

Carole King notably has achieved way more success than we are able to write about in just one post, but to say the least, her contributions impacted our music today. We love Carole King!

Check out CAROLE KING’s 1971 live performance for “Will You Love Me Tomorrow,” below.