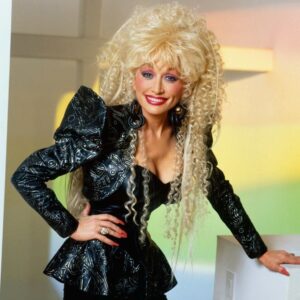 For Women’s History Month, we are spotlighting iconic women who’s talent impacted the history of music. Today we present: Dolly Parton, country legend. Dolly Parton was raised in a large family — she was child four out of twelve. Music was an integral part of where she grew up and was also an influence within her family. Her uncle bought her a guitar and by the age of 10, she had a small TV variety show gig in Knoxville. Soon after, she had eyes on her from Nashville (the home of country music,) where she made her first guest appearance on the Grand Ole Opry at age 13. She recorded a single (each) for two small labels while still in her teens. After graduating high school, Dolly moved to Nashville where her musical career began to pick up the pace and she gained recognition as a songwriter. Her first Top 40 hit was “Dumb Blonde, a song attacking traditional stereotypes. In 1967, Dolly replaced a singer on The Porter Wagoner Show, captivating audiences with her flashy outfits and beautiful voice. She was signed as Wagoner’s duet partner and as a solo recording artist which was major. From there, she went on to roll out #1 hits such as “Jolene,” and “I Will Always Love You.” She went on to be voted Female Vocalist of the Year two years in a row. Dolly eventually crossed over into the pop genre successfully, being named the CMA Entertainer of the Year in 1978. Alongside her music career with many awards and nominations, Dolly had a strong TV presence, doing talk-shows, specials, and other gigs. She also supports numerous humanitarian efforts and has launched her own initiatives. Dolly Parton is none-the-less a household name. In 1999, she was elected into the Country Music Hall of Fame.

Dolly Parton notably has achieved way more success than we are able to write about in just one post, but to say the least, her contributions impacted our music today. We love Dolly Parton!

Check out the official music video for DOLLY PARTON’s iconic “9 to 5,” below.