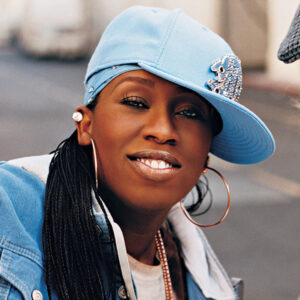 For Women’s History Month, we are spotlighting iconic women who’s talent impacted the history of music. Today we present: Missy Elliott, Hip-Hop legend. Missy Elliott always knew she wanted to be a star. As the only child, she would sing for her family and neighbors. Her childhood included sexual abuse and exposure to domestic violence. Fleeing those traumas, finances became the struggle. “You have to find some kind of peace,” she said in respect of her coping mechanism to her traumas and abuse. “I believe in a higher being, and that gives me faith to be strong and go on.” Missy Elliott moved on to become a songwriter, producer, dancer and singer/rapper. She had a rocky start as she formed a girl group “Sista,” and was signed to a record label and wrote their debut album which was never released. After the split of the group, she continued to produce songs and was able to work with a childhood friend from Virginia, Tim Mosely a.k.a Timbaland (producer/rapper.)

Missy Elliott’s first hit was written for Raven-Symoné, “That’s What Little Girls Are Made Of” in 1993. Her first vocal appearance in 1996 with a guest verse on Sean Combs remix of “The Things You Do,” a song co-written by Missy Elliott brought the attention to the CEO of an entertainment group who gave her the opportunity to form her own label. Missy Elliott released her debut album “Supa Dupa Fly,” in 1997 on this label and went platinum. Missy Elliott earned “Rap Artist of the Year,” on Rolling Stone. She continued to transcend and make historical music and won numerous Grammy’s and nominations. Missy Elliott has written music for artists such as (late) Aaliyah, SWV, Whitney Houston, Spice Girls, Mel B and more. Missy Elliott can also be recognized for her unique and creative artistry as she did not submiss to the male gaze as many female artists often felt compelled to do in the height of MTV era and rise of women in music. She always portrayed confidence and personalized style — recall the inflatable bodysuit she wore in her music video for “The Rain.” Other notable favorites include  “Get Your Freak On,” and “Work It.”

Missy Elliott notably has achieved way more success than we are able to write about in just one post, but to say the least, her contributions impacted our music today. We love Missy Elliott!

Check out MISSY ELLIOT’s iconic music video for “The Rain,” below.