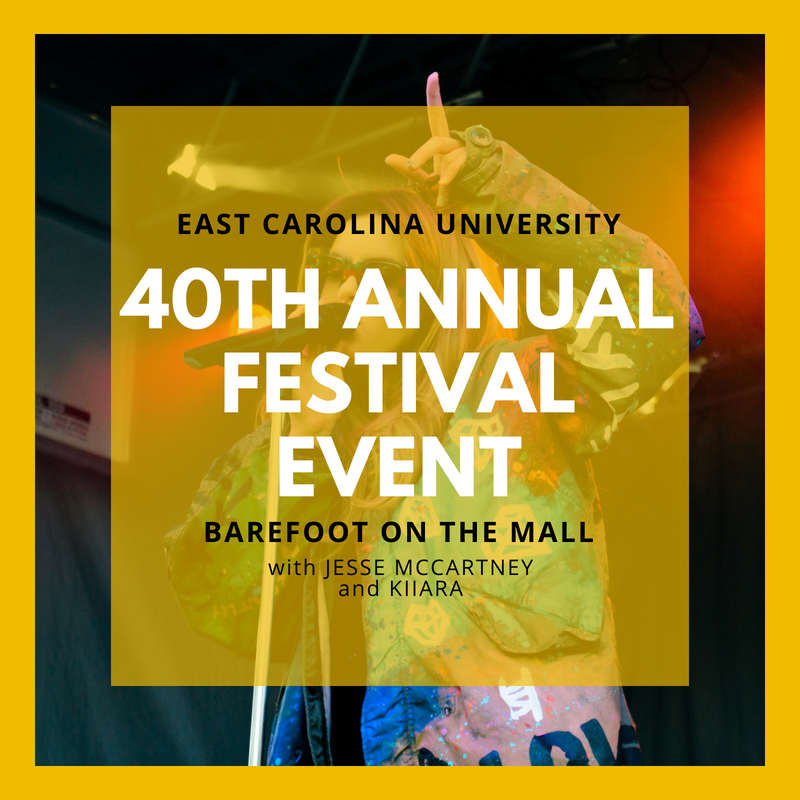 Annually for the past 40 years East Carolina University’s Student Activities Board has hosted Barefoot on the Mall. While the very first event did not include a national touring artist (it was headlined by a mime performance and jazz ensemble) this year’s festival featured JESSE MCCARTNEY and KIIARA. Recognizable acts from previous years include LOST BOYZ, PLAIN WHITE T’S, JASON MRAZ, and JASON DERULO.

The Assistant Director of Student Programming, Darrius Barrow, provided us with some Barefoot on the Mall 40th Anniversary Insight:

What made Barefoot 2018 unique to past years?

What was SAB’s vision for 2018 and did it play out the way you expected?  The main thing that made 2018 so special and so unique is that it was the 40th year of the event.  With that our vision and our theme was “Past. Present. Future.” and we really wanted to acknowledge that this is one of the longest university traditions while still keeping the event new and fun and innovative.

How were the Artists chosen?

Of course, popularity plays a big part in the selection, but this year we really focused on artist that embodied the theme and the message that we wanted to send.  Every college student loved Jesse McCartney for their past and still get excited that he has new music.  Add that with Kiiara, who is a rising star as well, and we felt that we had a lineup the fit what we were trying to do with the 40th Barefoot on the Mall.

What practices were used to promote this event?

We exhaust pretty much every avenue that we can think of to promote.  We are in multiple high-traffic areas around campus for weeks leading up to the event.  We also post banners and posters all over campus.  Also we put up promotional items at all of the other SAB events leading up to Barefoot on the Mall, and we push heavily on social media.

Did you face any challenges with this event and how did you overcome them?

Probably the biggest challenges we faced were revolving around construction.  With multiple projects happening to make ECU an even better place to attend, space can often become very limited very fast.  So, we were constantly working around and rearranging things both on-stage and behind the scene to make all of the logistics work.

What was your favorite moment from this event?

The most iconic moment from the event happened with the SAB President, Cristina Derespinis, introduced Jesse McCartney to the stage.  There were over 7000 people screaming in anticipation, and the moment and roar when we took the stage was nothing short of magical and symbolic of the work and effort that led up to the moment.

Keep up with ECU SAB: